Secrets of the Ueber-Brands

Why do some pay a relative fortune for a MINI car, Renova toilet paper or a skin cream and detergent from Aesop when those seem to have none of the ‘functional superiority’ conventional marketers would seek to demonstrate? Why were Cirque Du Soleil or Grey Goose so successfully launched despite having ignored the conventions of their categories? What might Gucci’s approach to marketing have in common with Nespresso’s?

These are some of the questions Wolf and I were intrigued by as we embarked on a journey to uncover what drives the sustained success of such brands – despite their premium prices and right through a global economic crisis. Some six years and uncounted interviews and case studies later, consistent answers – and our latest book– have emerged:

Today, prestige is accrued in many more ways than it used to. Its marketing rules are in flux and it is flourishing across pretty much all tiers and categories – from a US$ 2 drink to million dollar jewelry. Classic notions are shattered and prestige branding is being re-defined: Less traditional through pricing-up and celebrating yourself as rarified, but by evoking pride and aspiration through ideals and ideas wrapped in mythical storytelling; Less classical by building exclusivity through scarcity, but in fusing these with inclusivity and ubiquity; And less marketing-manipulated but more truth-minded, living brand-specific convictions rather than making-believe with thin veneers of gold-plating.

Welcome to the age of Ueber-Brands. An emerging breed of modern prestige brands which are above and beyond their competition not only in making their price premium an after-thought, but in courage and conviction. Thriving on paradoxes, breaking with traditions and inspiring us with commercialization strategies that set new standards and lead the way into a new kind of marketing for the new millennium.

The first thing to note is the one that remains unchanged: Modern prestige brands also reside on top – top of recognition and top of price tier. Not necessarily top in terms of volume, though that’s already becoming one of the things that are changing. And also not automatically top in profit, because the margins aren’t always as exceptional as the high price points may suggest. So what then makes them more modern? What’s new? It’s their behaviours, the ways in which they achieve these stellar positions, which are different. These ways or patterns can be devised into seven principles, which we will go through in Part 2. Overall, they address three overarching aspects:

1. The must of Mission and Myth

Allie Tsavdarides, Head of Marketing in Europe, Middle East and Africa for TOMS, the brand that invented what is now known as the ‘One for One’ giving model, put it this way when we spoke to her recently: ‘We never approached people primarily with our product or our business proposition. We share our philosophy and our identity, and that’s what people are buying into’. Key to this from the get-go was the brand’s founder, Blake Mycoskie, sharing his legendary trip to Argentina where the idea was born, initially personally and nowadays through videos like ‘TOMS 2.0’. And that’s the point: modern prestige brands, and not just the new ones like TOMS but also long-established ones like Hermès, who have retained their prestige and taken it into the 21st century, write their own story very intently, craft their own legend and build their own myth. And they root this self-created narrative in a deep sense of commitment – towards

themselves, their stakeholders as well as their environments. Ueber-Brands are built on big ideas, often even ideals, and they express these with compelling storylines. It is this combination of daring vision, self-determination and socio-ecological perspective that feeds their superior collective and aspirational power, very differently from their forbears. They know their story, they write it themselves (unerringly) and they make sure to take all their stakeholders, from employees to investors to trade partners and consumers, with them on their journey. In fact, they don’t just take them along, they activate, engage and inspire them. And that’s what makes them Ueber-Brands.

2. The balance between ‘Inclusivity’ and Exclusivity

Millennials, the generation that hasn’t known a world without the web and came of age around the millennium, have developed different ways of building social status. Ways where being a part is as important as setting yourself apart. The ultimate goal remains creating distinction, a sense of self and of superiority, but the means to achieve it have become softer, warmer and more accessible. Ueber-Brands have taken this to heart and show extreme attention to balancing exclusivity with connection where previous prestige brands were singularly focused on the former. They grow further than usually thought possible without diluting your sense of prestige. And they do so to a large degree by always sticking with or going back to their core fan base, the ones that personify their myth and their mission in the best possible way.

Red Bull, the premium-priced energy soda that created its own category and turned itself into a super-success is a perfect example of this. Their event marketing and sponsorships are legendary and there can only be few who are unaware of it. Yet, they always strive to do better, re-charging their myth with hard-core ‘energy’ icons like the strato-jumper Felix Baumgartner. And that’s what makes them an Ueber-Brand. They don’t sit, guarded and protected, waiting to be adored. They engage and actively push, yet carefully create an irresistible pull at the same time. They make their fame self-perpetuating, as it must be in the age of online communities, crowd- and co-creation and word of mouth.

3. The need for Truth

The other aspect of this digitally driven connectivity, and the third dimension of modern prestige or Ueber-Brands is truth. The will of one has been replaced by the wisdom of many and is currently morphing into the wisdom of mine. Single-source marketing has evolved into a multi-channel engagement game, with professional blogger recommendations already being replaced by those from personal friends. Over-promising and under-delivering is thus being detected and scolded quicker than marketers can say ‘new and improved’. Lapses in ethics or deficiencies in a company’s culture are outed before the PR agency can even be briefed. And this is changing the way prestige has to be built. Not outside-in, but inside-out. Not through marketing that stimulates desires by gilding the lily, but by marrying style with substance. The best prestige brands have always done this, which is why they are still here and part of this book.

Modern prestige or Ueber-Brands have made this a must, taking great care to practise what they preach, under- rather than over-sell and generally stay understated than overrated. They try to attract their fans rather than attack them, giving them time to discover their ‘truth’ and building it slowly and gradually from cult to movement so the base can solidify and the whole doesn’t turn into a bonfire. Yes, the products are wrapped in something bigger and this bigger something is what makes the brands shine stronger and brighter than others. But this can never be an excuse for a sub-par product. It is just the opposite: it requires modern prestige brands to think broader, deeper and further than ever before. Look at Freitag, which makes messenger bags – each one unique and personal – from recycled truck tarp, by hand, using recycled rainwater in the middle… right in front of your eyes or the digital video camera. It is an modern version of the artistic atelier at Hermes in Paris, except a blue collar, industrial, gritty one, which contrasts provocatively with the rich banker city of Zürich surrounding it. The brand (plant, store, people, products) makes a statement for everyone to visit and behold.

To sum up: Ueber-Brands are meta not mega. Where mega shouts power, meta means perspective. And that’s the big difference. Ueber-Brands and thus modern prestige are less self-important or aggrandizing than prestige used to be but more self-aware and self-reflecting. They don’t take themselves super seriously, but they do their mission and their myth. They don’t elevate their followers by putting others down, but by staying a step ahead and true to their core. And they shine not just around their products, but through them. And this is why Ueber-Brands can be of any size and come from any category at any price point. What puts them on a higher level and secures their stellar position is a sense of discrimination paired with dedication, and that is as priceless as it is progressive.

Check out our book ‘Rethinking Prestige Branding‘ and the blog and podcast for the full picture, case studies, interviews with Ueber-Brand builders and more. We hope you will enjoy the journey as much we did. 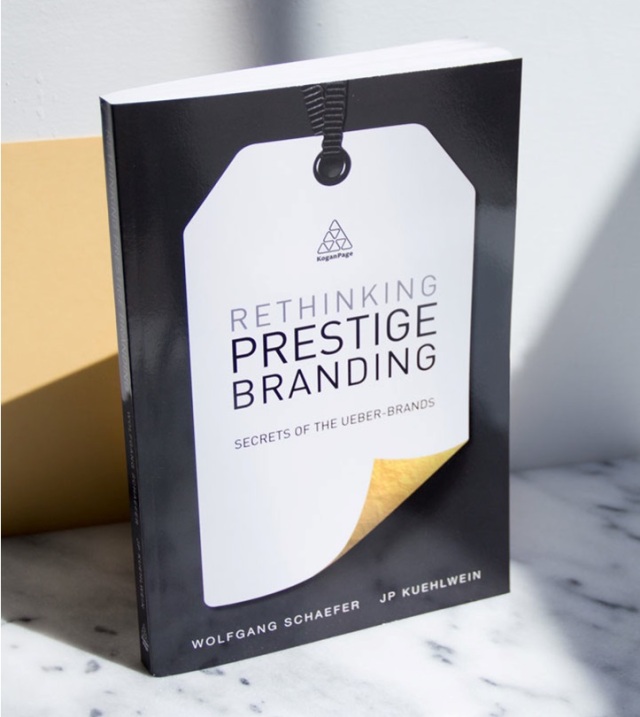 JP Kuehlwein is a global business leader and brand builder with a 25+ year track record of translating consumer and brand insights into transformational propositions that win in market. Principal at ‘Ueber-Brands’ a New York consulting firm, he now helps others to elevate brands and make them peerless and priceless. JP also teaches brand strategy at NYU Stern and Columbia Business School and leads the Marketing Institute at The Conference Board, all in New York. Jp previously was Executive Vice President at Frédéric Fekkai & Co, a prestige salon operator and hair care brand and lead brand- and corporate strategy development and execution at multinational Procter & Gamble as Brand Director and Director of Strategy. JP and Wolf Schaefer have co-authored the best-selling books “Rethinking Prestige Branding – Secrets of the Ueber-Brands” which lays out what drives the success of modern premium brands and "Brand Elevation - Lessons in Ueber-Branding" a guide to developing and executing a brand elevation strategy. Find the books here: https://bit.ly/UeberBooks
View all posts by JP Kuehlwein →
This entry was posted in 1 - Mission Incomparable - The first rule is to make your own, 2 - Longing vs Belonging - The challenge is both, 3 - From Myth to Meaning - The best way up is to go deep, 4 - Behold! - The product as manifestation, 5 - Living the Dream - The bubble shall never burst, 6 - Un-Sell - The superiority of seduction, 7 - Moving with Gravitas - The king never hurries, B - UEBER-BRANDS and tagged balance of inclusivity and exlusivity, exclusivity, Freitag, inclusivity, mission, myth, Red Bull, TOMS, truth, Ueber-Brands. Bookmark the permalink.

4 Responses to Secrets of the Ueber-Brands