This is a tale of two bottles.  A bottle of soy milk that stands out and tells a story and a bottle of perfume that inserts itself into the saga that is Hermès.  Both have in common that the stories they tell give meaning and value that must go far beyond the bottles and their content, since buyers pay a significant premium for them in stores full of valid alternatives.

I was browsing through the lifestyle and fashion news feeds on my iPad the other day – the kind of thing you do on the bus to the supermarket – when this headline caught my eye: “How Hermès managed to bottle the dawn”.  The related article by Toronto ‘Globe and Mail’ journalist Amy Verner talks of the new perfume ‘Jour d’Hermès’ and the – literally –

fantastic storytelling the French luxury brand does around its introduction(1).  It illustrates, again, the power of legends in branding;  Our fascination with stories that convey ideals through heroic actions and iconic manifestations employing, mixing mix facts and fiction.  A pinch of mystery ensures there is always more to explore and understand.

Hermès is already legend.  To most readers the name will evoke at least fragments of the iconic brand story:  Rare craftsmanship, a saddler workshop in Paris, the famous silk ‘carrés Hermès’, a Princess Grace hiding her possibly pregnant belly behind the now famous messenger bag that now carries her name, “faites nous rêver” (make us dream) photography and films, the Duc carriage logo, Martin Margiels, and so on.  Being appointed by patriarch Jean-Louis Dumas in 2004, perfumer

Jean-Claude Ellena is a relatively newer addition to this 175 year old story.  But the famously always-white-shirted, never-fragrance-wearing gentlemen, fits neatly into the noble, artistic and craft-manly tradition of the firm.

It is Ellena who is telling journalists the story behind his latest creation “Jour d’Hermès.” It is an enthralling story about eight years of love, labor that ultimately allow him to capture “the beginning of light” in a scent.  A scent that is luminous and light but “also sufficiently complex so that 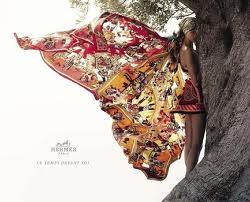 you don’t understand all of its sides.”(1)  In fact, the press release does not include specific notes, so that “we discover our own choice of flowers, smell what we want to smell” according to blogger Victoria(2) who professes she smells something new each time she wears Jour d’Hermes.  The way the new perfume is presented to the world is on par with its mysterious aroma.  Journalists are taken to Greece, to a clearing in the woods near Delphi to consult with Ellena (the oracle of Hermès?).   “White-clad nymphs tie scented ribbons around […] journalists’ wrists just as

the sun went up,” Verner writes.  Reviewers rave about the weightless luminosity “as if Ellena infused the liquid with some of the Mediterranean sunshine”(2) and try to decipher the intriguing composition of the potion.  The bottle –‘vessel’ – is being admired for elegantly suspending the light colored liquid in the airs.  It is a masterpiece by Hermes jewelry designer Pierre Hardy… 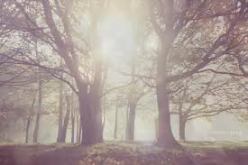 Hermes legend through careful crafting of the product, its manifestation and the communication.  We talk about this strategy in our model under the headers “Myth to Meaning – The best way to go up is to go deep” and “Behold! – The product and manifestation.” Theatre and shared rituals enthrall journalists, bloggers and others who will spread the story sharing their emotions and the product myth rather than the cold facts.  The latter include that the eau de parfum will sell for around $120/ml, clearly in 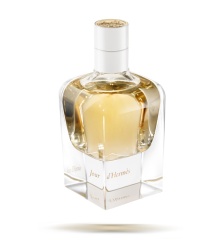 premium territory.  The business objective is to create a female pendant to the instant classic “Terre d’Hermes” launched in 2006.  The launch applies the model successfully used with Jardin sur le Nil (2006, journalists got to travel to Luxor), un Voyage d’Hermes (2010, perfume sales continue to grow at ~25% rate).  The tangible quality of the product and myth created around it is hoped to sustain the appeal well beyond the initial buzz. It wouldn’t hurt, if a star was overheard saying that they only wear ‘Jours’ on sunny Sunday mornings.

Having arrived in the supermarket, I was still thinking about this example of “bottling a dream” when an entirely different bottle caught my eye.

That’s where the soy milk comes in.  You need to know that I life in Hong Kong right now and that in rather lactose intolerant China, soy milk is a standard rather than some oddspecialty drink.  Usually, the soy milk cartons on the supermarket shelves look like what you expect from regular milk or juice in the West:  More or less identical gusseted 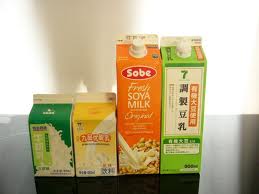 cartons featuring similar looking artwork and price points.  Yes, there are price differences of up to 15-30% – and for a mass manufacturer that can represent a huge premium.  But from a middle class consumer POV, the 30-60 cent difference really should mean nothing – right?  Not really.  Producers and retailers watch their pricing of such staples as milk, bananas or soft-drinks very closely.  It is believed that shoppers are very price sensitive with these ‘commodity-like’ items and use the (low) prices they see on such products as benchmarks to assess whether the brand or retailer offers ‘good value’.   And I have to admit that I belong to those who would usually just grab the cheapest milk , eggs or sugar on the shelf and get and get on with it.   So I rather surprised myself grabbing this interesting looking flask in the cooler section to take a closer look. “O’Beans – Organic Soymilk” it said.  The name and bottle shape made me think of Scotch rather than soymilk. 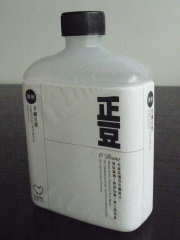 But then the matt shrink wrapping did feel silky soft rather than metal cold.  The back panel was intriguing, too. My Chinese is really rusty (i.e. I don’t read a word) but I guessed that the (slightly odd looking) person sketched on the right was providing some sort of testimony in the hand-written text on the left. – An emotional testimony, judging by the exclamation mark.  The icons and Chinese – English text made things even clearer:  This soy milk must be produced in a way that helps people who are mentally ill.  It helps them recover and ‘brings new life’.  This milk had pulled me in.  I put it in my basked.  I didn’t even look at the price, I think.  For some reason, I was anxious to taste it and find out more. For some reason I was excited to find that the soy milk tasted deliciously fresh, ‘organic.’

In hindsight I can explain what was going on here.  I often get shocked by how solely money-making focused many people seem to be and how many immensely rich people seem to live in Hong Kong.  At the same time, I note how very little seems to be done for 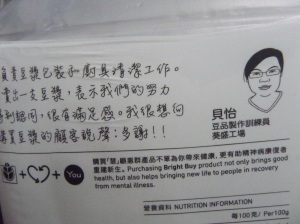 the less fortunate or even just the community.  But I had to admit to myself that I was not doing much either to fight that terrible air pollution, those concrete parks or the urban poverty I complain about, either.  So discovering a locally made product that speaks for itself, looks quite cool, seems healthy AND does good – and maybe teaches all to do good — just felt good.  It gave a simple need and act (buying some milk) much deeper meaning for me.  It provided me with something to talk about (read this blog) and enjoy.  Something that helps me mark my ideological territory.

The context and message conveyed are different.  But at the end, the flask of O’Beans and vessel of Jour d’Hermès can play a similar role to their user.  A story to tell;  A statement about themselves;  Some enjoyment;  Making price an afterthought.

I did research the O’Beans story a bit more.  The milk retails at about double the price of regular soy milk.  It is distributed mostly in places where expats and the ‘rich’ shop and eat – like specialty supermarkets or Agnes-b. Cafés (ouch!).  As far as the personal note on the back goes.  It is from one of the ladies who make the milk.   He says that she is in charge of running and cleaning the kitchen and that it makes her really happy to see that that the customers like what they make.

(3) To get a sense of how enthralled some can get with perfumes, read this post “Jour d’Hermès – new mythical perfume” by Octavian Coifan.  I quote “This is Jour d’Hermès – the first rays of sun entering the temple, the first molecules entering the nose (naos), the first flowers in a sacred place, whether the Delta or “le jardin de mon curé”, and other first things.
What does it contain? It is vulgar to decipher such a beautiful perfume, the ingredients are in my metaphors. A perfume needs no “official pyramid” to be loved, only a bottle to be preserved.” (on Octavian Coifan’s blog “1000 Fragrances”; Dec, 2012.)

JP Kuehlwein is a global business leader and brand builder with a 25+ year track record of translating consumer and brand insights into transformational propositions that win in market. Principal at ‘Ueber-Brands’ a New York consulting firm, he now helps others to elevate brands and make them peerless and priceless. JP also teaches brand strategy at NYU Stern and Columbia Business School and leads the Marketing Institute at The Conference Board, all in New York. Jp previously was Executive Vice President at Frédéric Fekkai & Co, a prestige salon operator and hair care brand and lead brand- and corporate strategy development and execution at multinational Procter & Gamble as Brand Director and Director of Strategy. JP and Wolf Schaefer have co-authored the best-selling books “Rethinking Prestige Branding – Secrets of the Ueber-Brands” which lays out what drives the success of modern premium brands and "Brand Elevation - Lessons in Ueber-Branding" a guide to developing and executing a brand elevation strategy. Find the books here: https://bit.ly/UeberBooks
View all posts by JP Kuehlwein →
This entry was posted in 3 - From Myth to Meaning - The best way up is to go deep, 4 - Behold! - The product as manifestation and tagged attention to detail, beyond compare, brand manifestation, brand myth, craftsmanship, heritage, Hermes, Hong Kong, Jean-Claude Ellena, Jean-Louis Dumas, linkedin, luxury, O'Beans, Perfume, soy milk. Bookmark the permalink.