We say in our premium branding model that “the first rule is to make your own” as one strives to develop brand myth and meaning. – It’s ‘Mission Incomparable’.   Many premium brands are about identity construction.  They help customers to elevate themselves into something better, bigger, newer, to identify themselves as individuals or to mark their belonging to a social group.  To do this, the brand needs to ‘stand for something’.  Just think of Apple, Aston-Martin or Aesop.  Language is an important part of that brand identity creation and story-telling,.  Whether the language is literal-, visual-, or other; whether it is used by the brand or its loyal followers. – Ideally it will be a unique combination of these.   It can give the brand that authentic character.  So when Harley Davidson seeds a

video “Live By It” that professes that Harley (bikers) “believe in bucking the system that is built to smash individuals like bugs on the windshield,” it picks-up, curates, re-disseminates and strengthens a language that surrounds the brand and shapes it into a meaning-giving credo (take a look at the video).  The video also reflects the body language, gestures and rituals of HOGs (Harley Owner Group member). To be perceived as staged or as ‘talking up’ the brand would burst the bubble.  Fans need to rally behind the credo and make the language their own. – Just read the discussion around the video on Youtube. 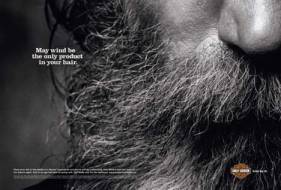 Harley could elevate the language and imagery of a notorious fan community (think Hell’s Angels) in the 80s to create a freedom myth with broad appeal (think middle-class ‘week-end warriors’).  Starbucks had to invent its own language and place in the 90s.  Yes, Starbucks was inspired by Italian coffee culture but there are no ‘venti’ coffees in Italian espresso bars and nobody there would have had a clue what a ‘Frappucchino™’ is supposed to be.  That is why is a “TM” super-scripted behind the word .  In fact, Howard Schulz was not very successful trying to make a rather literal copy the Milanese Espresso bar concept and language work – first as marketing manager at Starbucks, then with his own brand ‘Il Giornale.’  It was only at his third attempt, after he bought the fledgling Starbucks store, that he developed this singular interpretation of a coffee and place that

appealed to an American middle-class looking for a simpler way to gourmet sophistication than to have to jet to foreign Italy.  He used tools and processes that were familiar (eg. menu tables, paper cups) but added the distinctive language and rituals (eg. writing your name on the cup) and created an overall unique experience which people called the ‘third place,’ between home and office.  The language played a key role in creating this desirable place.  After all, Duncan Donuts existed before and served coffee in pretty much the same way ‘in principle’ and Mc Donald’s created a copy in McCafe later.  Apparently, the coffees of the latter both win in blind testing against Starbucks.  They certainly cost a lot less.  But then, your ‘barista’ shouting out your ‘grande skinny 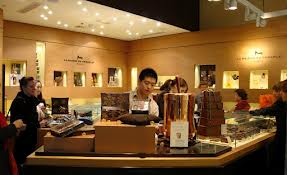 Once you understand language and its potential to create distinctive equities and elevate a brand, it can become a hobby to decipher and assess the effectiveness the language a premium brand speaks.

When you visit a ‘Maison Du Chocolat’ boutique, it feels more like you are buying a finely crafted and precious jewel rather than pieces of chocolate.  The literal and visual language suggests it.  Take the ‘Pearl Collection’, presenting “spectacular ganaches …. in a gold nacre sphere that resembles a pearl” and kept in glass cases similar

to those in a jeweler’s shop.  Rather than feeling like a forbiddingly expensive indulgence ($50, up), buying a few of these mouth watering creations can be experienced as an affordable alternative to shopping at Tiffany’s.    Jean-Paul Hévin, another ‘chocolaterie fine’ brand produces “chocolate stilettos” and cigars.  High heels, a smoke and chocolate, how much more sensual and explosive can it get?

Close your eyes and think of Nespresso.  Rather than a cup of coffee, colorful ‘pods’ arranged like fine pralines might come to mind or the beautifully designed machines or the exquisite shops where you can buy both.  At the top of the Nespresso line ups are the – often seasonal – “Grand Crus” reminding you of fine Bordeaux wines.  Nespresso Club 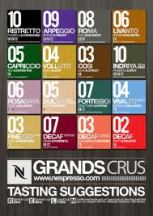 members will be counseled on which ‘saveur’ fit which type of personality or occasion or be introduced to the art of preparing – and talking about the perfect “Kennedy” (three shots of espresso) or “Night Rider” (cocoa mix, espresso in filter coffee with no milk), enabling them to talk about their cup with the suave sophistication of a George Clooney.  Compare these mythic ways to serve and talk about coffee with putting jars of Nescafe in front of their guests or talking  about the eye-opening aroma of Folgers – Would you?  Sharing that a Nespresso tastes even more delightful when prepared using flat German mineral water** is a little secret you will be more proud to share.

since 1778’ brought to you by Badoit and served up like the finest champagne.  This French brand has re-staged itself as the connoisseur’s choice and is giving Perrier and company a run for their money.  Part of their efforts is to offer wine and water pairing classes as well as limited edition art bottles that you typically associate with fine wines and champagnes.  The decorated glass bottles sell for about twice as much as the regular PET bottles.  Judging by the swift sell-out, consumers seem more than willing to pay for these ways of surprising and charming them.

If you are not a devotee and are able to step-back, the language of some premium brands can strike you as rather comic.  Take La Prairie, the super-premium skin care brand

selling for a few hundred dollars and more per jar and using the language of precious foods and metals.  The website educates us that the base line is the “Caviar Collection” which “firms and pampers your skin”.  Appropriately, we see a champagne glass right next to what looks like a jar of Russian caviar in related communications.  Then there is the higher priced “White Caviar Collection” and the “Radiance Collection, the Gold Standard for De-Aging” which makes your skin “look more radiantly alive” and comes in a gold-rimmed 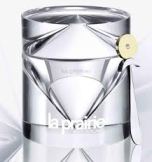 pack. Finally, the ‘piece de resistance’, the “Platinum Collection”, in which “the most precious metal on earth now empowers your most precious asset. Your skin.” This collection is packed in what looks like platinum enclosed in acrylic and comes with a silver-gold spoon encrusted with what looks like a diamond – and it might just be one, given the $1,000 plus price tag for 50 grams.  I think there are also some ground diamonds in creme, as well to make your skin sparkle.  At least that is what I seem to remember from what a beauty counselor  told me at their counter in the Geneva airport. 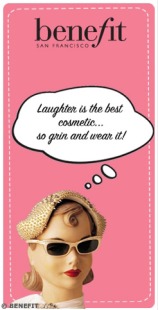 Adopting a language a-typical for your brand can be fundamental to your brand as in the case of La Prairie above or the philosophical Aesop beauty brand (see our in-depth case study) or the free-spirited, quirky-comic ‘benefit’ cosmetics brand.  As benefit founders Jane and Jean say “who says that make-up has to be serious?” Their “beauty locker room banter” language and attitude has shaken-up the category and become iconic.

But language can equally serve to create a playful framework for an initiative or a disruptive appearance that fits but also fuels the brand’s character.  Take the “Liquor Store” by J.Crew in NY, which showcases the fashion brand’s men’s wear in what feels like the authentic vestiges of the former Soho watering hole – complete with bottles, beakers, and vintage beer posters.  It’s the kind of place a Harley might be parked in front.  Not that the Hells Angels – who might have had drinks here in the past – would shop at J.Crew.  It is rather those cool Wall-Street career types who might ride a Harley on the week-ends to add a rebel twist to their style. …  Which brings us full circle in our review of brands, their language and how they can create meaning for us.

Watch how MDC elevates their product – literally and figuratively: 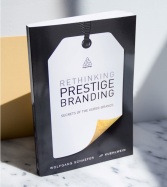 The post describes just one of the techniques how brands elevate their products and take them ‘Ueber’ – above and beyond. Read about all the principles behind Ueber-Branding in JP and Wolf’s book “Rethinking Prestige Branding – Secrets of the Ueber-Brands“.

If you want us to help elevate your own brand to Ueber-Brand status, then contact us here.

Harley Davidson’s “Life By It” video.  Interestingly, Harley originally posted the video, then withdrew it.  It now gets disseminated through brand disciples, which adds to the authenticity to the message:

A blog discussing ‘Biker Symbology’.  These are the kind of conversations and rituals Harley Davidson can source from when looking for the authentic brand language their fans desire.

* The challenge for Starbuck’s today is, of course, that its language has found many upstart imitators and Starbucks itself has grown into such a mass machine that the intimate experience I describe above is fading.  Coffee connoisseurs search out the ‘real, local coffee shop’. Starbucks introduced them to coffee as lifestyle. Now they are looking for a more ‘authentic’ (read: less commercialized and scaled) choice.

Here is a post reviewing the “Chocolate Stiletto” by Jean-Paul Hévin.  Clearly, they consider it an ‘object of fashion’… rather than a chunk of chocolate.

That tray, by the way, turned out to be a fantastic trial driver for Nespresso.  Hosts love to show it off and make sure it is stocked with a variety of flavors to talk about.  Guests get a bespoke sampling of Nespresso together with a personal endorsement.

Here is a video by Badoit.  Observe the festive and artful language and rituals typical of champagnes – and the absence of a pitch that would expect for a drinking water commercial.

Links to the Benefit and la pairie websites showcasing the idiosyncratic language of the brands.

JP Kuehlwein is a global business leader and brand builder with a 25+ year track record of translating consumer and brand insights into transformational propositions that win in market. Principal at ‘Ueber-Brands’ a New York consulting firm, he now helps others to elevate brands and make them peerless and priceless. JP also teaches brand strategy at NYU Stern and Columbia Business School and leads the Marketing Institute at The Conference Board, all in New York. Jp previously was Executive Vice President at Frédéric Fekkai & Co, a prestige salon operator and hair care brand and lead brand- and corporate strategy development and execution at multinational Procter & Gamble as Brand Director and Director of Strategy. JP and Wolf Schaefer have co-authored the best-selling books “Rethinking Prestige Branding – Secrets of the Ueber-Brands” which lays out what drives the success of modern premium brands and "Brand Elevation - Lessons in Ueber-Branding" a guide to developing and executing a brand elevation strategy. Find the books here: https://bit.ly/UeberBooks
View all posts by JP Kuehlwein →
This entry was posted in 1 - Mission Incomparable - The first rule is to make your own, 3 - From Myth to Meaning - The best way up is to go deep, 6 - Un-Sell - The superiority of seduction and tagged Apple, attention to detail, Badoit, Benefit, brand language, brand manifestation, brand meaning, brand myth, differentiation, Harley Davidson, J.Crew, Jean-Paul Hevin, La Prairie, Le Labo, Maison du Chocolat, Nespresso, Starbuck's, ueberbrands. Bookmark the permalink.